Parr Facilities Management are proud to continue our relationship with Co-op Food and Funeral Care Estate Team across the UK and have recently supported Co-op’s Wolstanton funeral home with a multi-discipline refurbishment project valued at approximately £420,000. The funeral home building is a prominent part of the Stoke-on-Trent area in England, due to its stature and location.  The building has been a part of the Co-operative movement for many years having previously been a significant office for the Norwest Co-operative prior to Co-op Funeralcare taking up residency following a merger in 2007. In recent years there has been consistent public interest in the overall condition of the historic and iconic building, which has led to the partnership with Parr FM to preserve and restore the building.

Throughout the project, the Parr FM team coordinated various trades and contractors and maintained high levels of communications with the clients and stakeholders whilst the building remained fully operational during the refurbishment process. This was of significant importance as the funeral home is incredibly busy therefore it was imperative that the project did not interfere with the ability to run the home in a safe, and dignified, manner.

The five-month project consisted of strengthening and insulating structural works and replacing the entire roof of the building. Internally, Parr carried out structural repairs, working side-by-side with building control for the duration of the project. Parr carried out structural repairs as per the engineer’s report and – to ensure the success of the project – building control were involved from the beginning and reviewed throughout the works, finally signing off all the works carried out.

Previously, the top floor of the building contained asbestos in the ceiling void. When Parr’s teams arrived on site following abatement there were no ceilings and the roof was visible from the second floor. In order to achieve the specified U-values for the building, Parr planted 50mm extensions to all roofing trusses and rafters. A 75mm insulation board was then placed between the joists and a 50mm insulation plasterboard added covering the roof trusses which were then replastered. The scope of work for this project was to patch repair, but to ensure Parr maximised the impact of the works all the walls were smoothed and redecorated creating a stunning refurbished space on the upper level.

During the project, the outside of the building was fully scaffolded and staged to safely accommodate the intricacies of the historic roof design. First, our teams scaffolded around the chimneys stacks to allow to re-bed and re-point the coping stones. In order to maintain the look of the original building, only around 20% of the tiles used were new with many tiles used being from the original building. The existing roofs were then removed and updated with a modern breathable felt and new batons and then tiles were refitted. Various other small remedial works were carried out as part of this project including new gutters being installed as the existing ones were outdated. 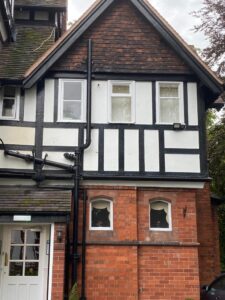 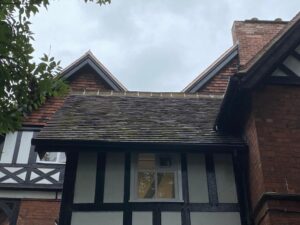 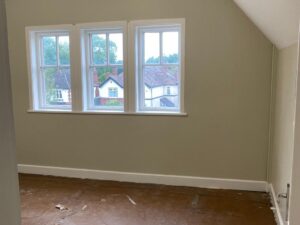 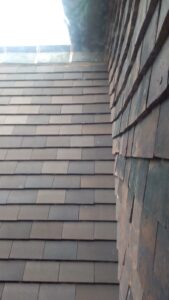 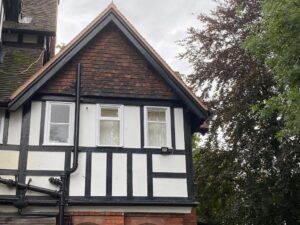 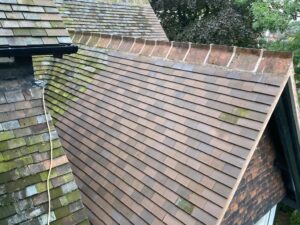 Parr Facilities Management Group is extremely proud to have carried out an extensive project with such professional results, facilitating continued operations by the Co-op Funeral Care team as works were undertaken and also remaining sympathetic to the historic style and build of the funeral home. This positive sentiment was echoed by our client as Carl Plant, Head of FM – Funeralcare & Food said, “The Wolstanton funeral home looks fantastic. The Parr team have done a really great job and it’s finished to a high standard. The Funeralcare team are extremely happy with it, and more importantly, they have called out the great support and collaboration from the Parr FM team throughout the works.”